I just returned from a delightful time in the country of Belize. This marked my first international excursion for 2016, and my first visit to the Central American country. Belize and Panamá were the only Central American countries on my travel list. I crossed out Panamá in 2015, so when the opportunity presented itself to head to Belize (i.e., a reasonably priced flight), I took it. My mom wasn’t too thrilled about it. When I told her I was going, her exact words were, “somebody’s gonna kidnap yo ass.”

My arrival at the BZE airport went very quickly. I went through immigration and customs in 7 minutes. The immigration officer didn’t even speak to me. Buster! There were about 8 people ahead of me in the immigration line, and it moved quickly. There’s 3 or 4 lines for arriving visitors, with 2 agents working each line. I glanced behind me as I left, and the line had gotten very long, so I somehow lucked out with my placement and the timing was just right so that I didn’t have to wait.

Luckily for me, I didn’t have to go through baggage claim. That would have been another wait. Yes for #teamcarryon! I continued on to customs which went even quicker. There were 2 people ahead of me, but I don’t think I stood there for 7 full seconds. The officer took my passport and declaration form, asked where I was going, signed it, and sent me on my way. I took about 7 steps and was outside the airport where my driver, Modesto, was waiting for me.

I booked a shared shuttle transfer via Viator in order for the 2-hour journey from the airport to the Clarissa Falls Resort just outside of San Ignacio. I’m not a beachy person, so a visit to the cayes didn’t really entice me. Staying inland near Mayan ruins and in the midst of locals was more my speed, so I chose to stay in the Cayo district. Modesto offered to stop for bathroom breaks, snacks, and an ATM on the way. The USD is widely accepted in the country, but I felt that I should have some of the local currency, especially since I was staying inland rather than at some of the more touristy cayes. Queen Elizabeth is the face of Belizean currency. Although the country obtained their independence in 1981, she is still considered the official Queen of Belize. She’s only visited the country twice, her last visit being in the 90s.

​Modesto was very nice, and I could tell that he was very proud of his country. The scenery during the ride wasn’t very visually stimulating, so we talked a lot about the country. One notable topic was that school is required for all kids, but education is not free. So if parents cannot afford to send their kids to school, they can get fined. How crazy! If you can’t afford to send your child to school, then you damn sure can’t afford to pay a fine. We also talked about music (he wants to visit the U.S. to go to a country music concert), and the mennonites.

When I arrived, I was greeted by Mrs. Chena, who told me my room wasn’t ready. Apparently, Mrs. Chena had been busy with guests who did’t want to leave. That was fine with me because I really was about an hour early, and I wanted to explore the area and have some lunch first, so there was no rush. I ordered relleno negro, which is a spicy black soup with chicken, boiled egg, meatball, onions, peppers, and diced tomato. It’s black because of the chili paste that is used to cook it. It looks nasty, but it was soooo good.

There were a lot of tasty Mestizo-styled dishes, and I wished that I was able to stay longer to try them all! While they cooked the relleno negro, I walked around the property a bit.
Clarissa Falls Resort isn’t what a normal American would imagine when hearing the word “resort,” but I knew and understood this in advance. It’s actually a 900-acre family-owned ranch, and my lodging was a thatch-roof cottage. It came highly recommended by someone within my travel community, and I’m glad that I trusted her recommendation. I would not have seriously considered it when I went looking for places to stay. I booked the lodging a two months in advance by calling the resort owner, and she sounded very sweet on the phone, so I was anticipating our meeting.​Clarissa Falls is located right upon the Mopan River, and the sound of the water rushing down the river was very calming. By the time I was done with lunch and listening to the calming river, my room was ready. The room had two beds, (one full and one twin size), a bathroom with shower, 2 revolving fans, and 2 windows. That was basically it, and that was all I needed. No real amenities other than soap and fresh towels. 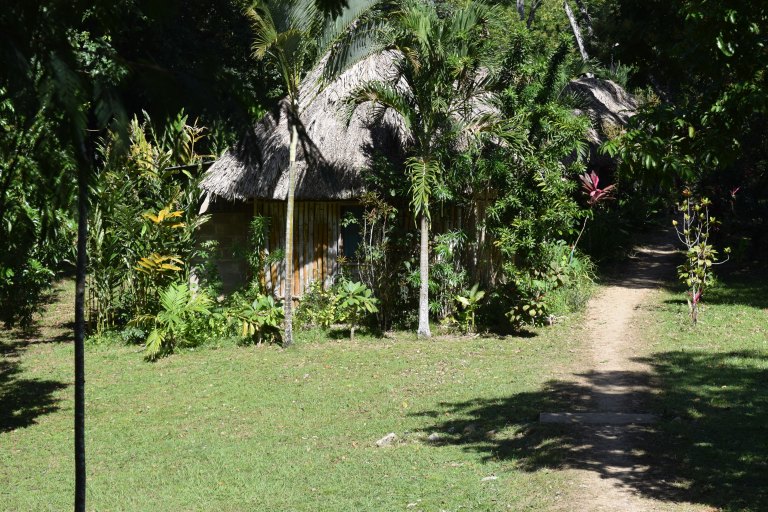 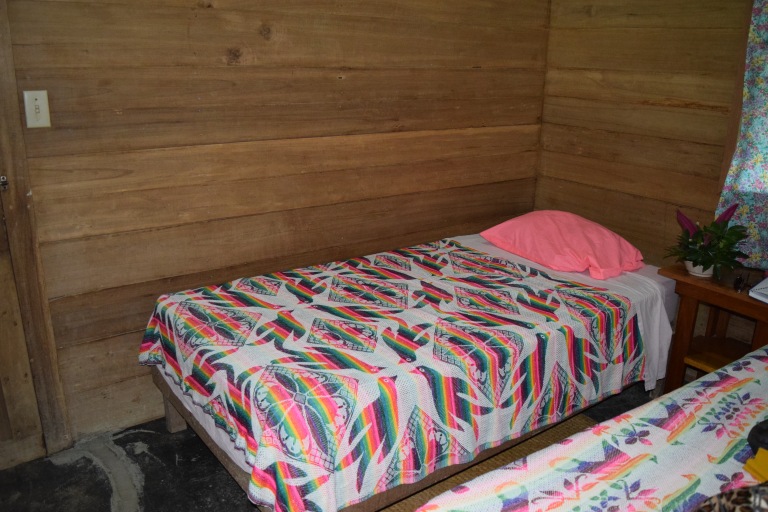 After unwinding in my room, I asked Mrs. Chena for the bast way to get to San Ignacio – taxi or bus. She ended up giving me a ride to the end of the road, and helping me flag down a taxi. While waiting for a taxi, she explains that a girl had been murdered just a couple of days ago nearby. That frightened me because I was under the impression I’d be safe in that particular area. It really is a good thing that I had spotty internet access or I would have googled it and been overly paranoid. When I got back to the states, I discovered that it wasn’t actually a girl who was murdered; it was a woman who had been traveling solo like me. It’s quite intriguing because that area is very desolate, so I doubt the murderer was someone who just so happened to be in the area and took an opportunity. I’d like to think it was someone she knew – someone she felt comfortable around. Perhaps a worker on the ranch or perhaps another tourist.

Before I could ask any further questions about the murder, a taxi shows up to give me a lift to San Ignacio. In San Ignacio, I stroll around to some of the shops but don’t buy anything. I later regret not purchasing a carved Mayan calendar from Back to My Roots. Somewhere along Burns Ave, I was minding my business when I heard someone yell, “Wow! Dark and lovely!” I couldn’t help but to laugh, which was obviously a mistake. Next thing I know, the body attached to the voice starts to peddle my way on a bicycle. He lets me know that he has what I need. Weed, anything. Yep, I’ve been in San Ignacio for 15 minutes, and I’ve already met Rojo, the weed man. I didn’t need anything he had to offer, but he insisted on following me around and telling me to come and “holla at it him later” at his hangout spot somewhere near a bench. I just kept walking until I got to Hode’s Place, a family friendly place that provides all sorts of services – food, drinks, lodging, children’s playground, pool tables, and anything else you can think of.

​I ordered a frozen coconut, which was coconut rum and coconut cream. It was very good, although not very strong. There was a group of American guys sitting at a table watching the NFL playoffs, and I just hung around with my drink and the free wifi until I decided to head to Sacred Heart College for a basketball game.

Belize’s national basketball league, NEBL, had just begun their season, and the Cayo Western Ballaz (the home team) were playing their first home game against the Independence Thunderbolts. For the record, many of the country’s teams have interesting names like Ballaz, Bandits, and No Limit Soldiers.  I feel like I need to visit again just to go to a No Limit Soldiers game. I just know it would be just like the Master P video.

Anyway, It seems like all of the locals in the town of San Ignacio were at the game on that particular night, so when you’re in Rome…Over at Sacred Heart College Auditorium, I paid the entry fee equivalent of $5USD for a ticket in the VIP section. I thought I would have a better seat, but the section was actually behind the backboard. It turned out to be a section full of gorgeous selfie-taking girlfriends and family of the players. This was probably the highlight of my trip – just blending in with the locals, and listening to the DJ excite the crowd.

The game itself was pretty uninspiring. There wasn’t any real play-calling happening, just a lot of running from goal to goal. They were the most non-free-throw-making dudes I ever saw. The final score was 105 – 52, with the home team taking the win.

​Once the game ended, I had to walk back down Burns Ave until I found a taxi near the police station. Along the way, I ran into Rojo again. “Wow! Dark and lovely! Dark and lovely?! Dark and lovely? Wow!” This time I didn’t laugh, and instead kept walking. The taxi took me back to Clarissa Falls for $2o, which Mrs. Chena said would be an appropriate price. I called her to let her know that I was coming, but mainly to let the driver know that someone was expecting me in case he had plans to snatch me up. She let me know that she had made arrangements for me to go to Tikal in Guatemala the next day, and that I needed to be ready for breakfast at 6:30 because someone would pick me up at 7 am.

I made it to my temporary home safely, despite the fact that the taxi driver’s old Toyota car sounded like it was about to fall apart. When he turned onto the gravel road that led to Clarissa Falls, he should a driven slowly. Instead, he was going full speed ahead, hitting all of the holes. At some point he hit a really rough spot and all of a sudden I hear clinking noises coming from the Toyota. I’m not even Catholic, but I made the sign of the cross about 5 times at that moment.

When I got to the property, it was pitch black and I had to use the flashlight on my phone to find my room. Of course I got lost, and had to call Mrs. Chena again. I felt so bad to have to disturb this woman in the middle of the night! Luckily, I found my room a few moments after I called her, so she didn’t have to get out of her bed to come and help me.

Once inside, I took my hot shower and went to bed, anticipating the next day in Guatemala.