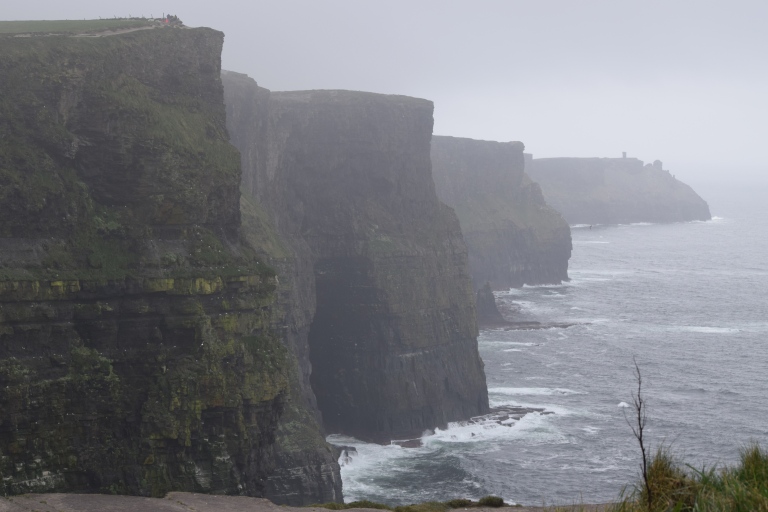 When I saw a photo of the Cliffs of Moher, I knew I needed to visit Ireland. It was just beautiful, and I wanted to witness it for myself. While I was in Dublin, booked the Cliffs Of Moher, Atlantic Edge Ocean Walk & Galway City Day Tour with Wild Rover tours. The bus was equipped with wifi, and our guide was entertaining. He walked down the bus and chatted with every passenger. We spoke for a while about the beauty of Haiti, and the time he got high in Jamaica and almost missed his bus.

They don’t mention this in the tour description, but we stopped for a break at the Obama gas station before we arrived at the cliffs. I didn’t know this was a thing, as I was entertained by the fact that it existed in the Irish countryside.

When we arrived at the cliffs, our tour guide recommended that we walk to the area with the best view right away in case the weather worsens. The hazy fog blocked any clear view of the cliffs, and I was disappointed because that was the most convincing reason for me to visit Ireland. I kept walking along the trail, glancing at the sky every once in a while. The haze was moving slowly, but I could tell that clear skies were approaching.

One thing I failed to consider was the fact that people used this area to escape from their realities. There was signage marked in certain areas that contained the number to a free hotline for anyone having a difficult time navigating this thing called life. There were no barriers to prevent someone from jumping or accidentally falling to their deaths.

I headed over to the visitor center gift shop to see what they had to offer. I didn’t make any purchase, but there was a wide variety of items available. Just when it was time to go, the weather began to clear. I was able to get a clearer view of the cliffs, and snap some decent photos, but it doesn’t compare to a sunny day with clear skies.

The bus took us to the Atlantic Edge next, where we were able to walk around the limestone rock formations next to the Atlantic coast before heading to Galway. Our guide offered a walking tour of Galway, but I was too hungry to go. Instead, I grabbed lunch at this Mediterranean spot then strolled through the city on my own.

I can’t really think of anything to compare to Galway. There were bohemian street performers attracting a crowd on the cobblestone streets, but on the next block was a group of men in business suits smoking cigarettes outside of their office. The city seemed clean and not too rambunctious, but I could be very wrong. I was in Galway the same day Ed Sheeran was in town, so it was madness trying to get out of the city. We made it out, and back to Dublin after dark. Overall, it was a good trip, but I wished the weather had cooperated with me.