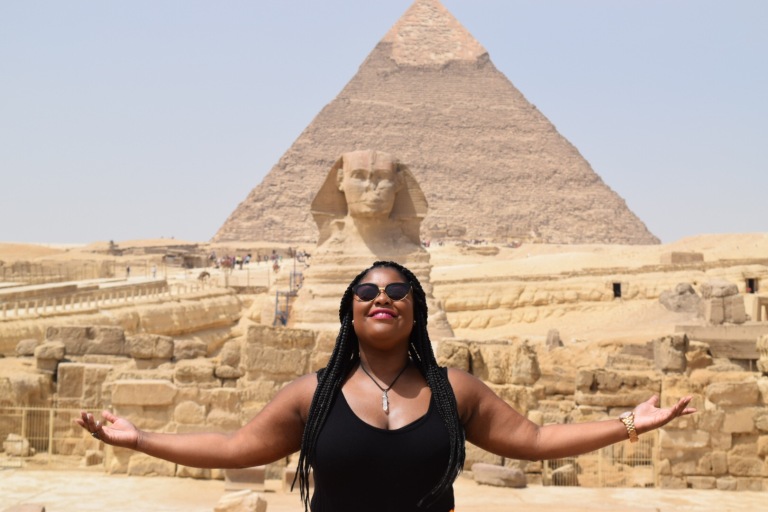 It took me three hours to make it out of Cairo’s airport. It was the longest time I have ever spent upon arrive in an airport, and an unexpected reality after traveling for 21 hours. My Emirates flight arrived from Dubai at 11:45 PM, and several other international flights landed within an hour of that time. That meant there were hundreds of people gathered in lines trying to get through immigration. It doesn’t appear that Cairo’s airport has established a method to expedite this process, but there was a separate line for diplomats and other VIPs that had zero wait time. There were over 30 lanes available, but only five officers working. I felt like I was at Walmart.

The wifi in the airport is limited to 30 minutes, and one has to provide an access code that is sent via text in order to connect. Well, my phone was not working in Cairo at all so there was no way for me to receive a text with a code that would allow me to connect to the airport wifi for 30 minutes in order to let my driver know that things were moving very slow at passport control. I was so afraid that he would leave after assuming I didn’t show up. Then I would have to fend for myself and negotiate a taxi to my hotel, a thought that gave me anxiety.

Egypt recently implemented a process for obtaining e-visas, but I decided against it since the process for obtaining a visa upon arrival was simple enough for me. I walked speedily through the airport and to one of the banks to purchase the entry visa for $25 USD. This process was supposed to go quickly, but there was already a line of people at the bank exchanging currency. That took some time, and I stood there nervously while watching the number of passengers trying to get through passport control increase as more flights arrived. When I reached the front of the line for a visa, all I did was hand over my $25 USD and the man handed over the small sticker. I was done in less than three seconds.

Next, I got at the end of a long line for passport control. There were three of them, and I selected the middle one, which of course became the slowest moving option. People’s angst grew as the time waiting increased. Two separate verbal arguments that almost escalated into physical altercations occurred. One of them was between a man and a woman, and something about that argument told me that women’s voices weren’t well-respected in that country because no one in the immediate vicinity of the woman made an effort to tell me man to lower his voice and pull himself together. At some point, three men tried to cut in front of me in line. The man standing behind me wasn’t having it at all. He said something to them in Arabic, and they backed away. After about 1.5 hours, I made it to an officer’s desk. He stuck my visa in my passport, stamped it, and sent me on my way without a word.

It had been two hours since I had arrived at this point, so my checked luggage was waiting for me at baggage claim. I grabbed it right away and proceeded to customs with nothing to declare. Again, I got in the wrong line and had to wait some time while the other lines flowed continuously.

Finally free in the arrivals hall, I had one more stop before exiting the airport. I needed to get a SIM card for my phone, so that I could communicate with the world outside of wifi. There was a line of five people in front of me with two employees working at the kiosk. I hopped in line thinking this would go quickly, but of course it didn’t. The people in the line were buying and activating three SIM cards each. It took an eternity. I finally got to the SIM card for my phone and headed out the door of the arrivals hall praying to the travel Gods that my driver was still there and I didn’t have to take a taxi.

Surprisingly, my driver was still there waiting for me. Shout out to Ahmed! He had been trying to contact me, but of course my phone was out of service until I got the SIM card. We hopped in the car and headed to my hotel in Giza, which took about 40 minutes since it was late at night and the usual Cairo traffic had decreased. I was surprised by the number of people who were out in the streets that late at night selling food, t-shirts, and other random items.

We arrived at my hotel, and I went through a metal detector before entering the building. Going through metal detectors would become a regular occurrence throughout my visit in Egypt. By the time I reached my hotel room, it was nearly 3:30 AM. The bellman told me that if I wanted to wait about thirty minutes, I could indulge in the hotel breakfast buffet before I went to sleep, which began at 4:00 AM. That’s exactly what I did, but not before I made a stop at the ATM for some Egyptian pounds. I showered, made it bed at 5:00 AM, slept until 9:00 AM, and met my guide right at 10:00 AM to head to the pyramids.