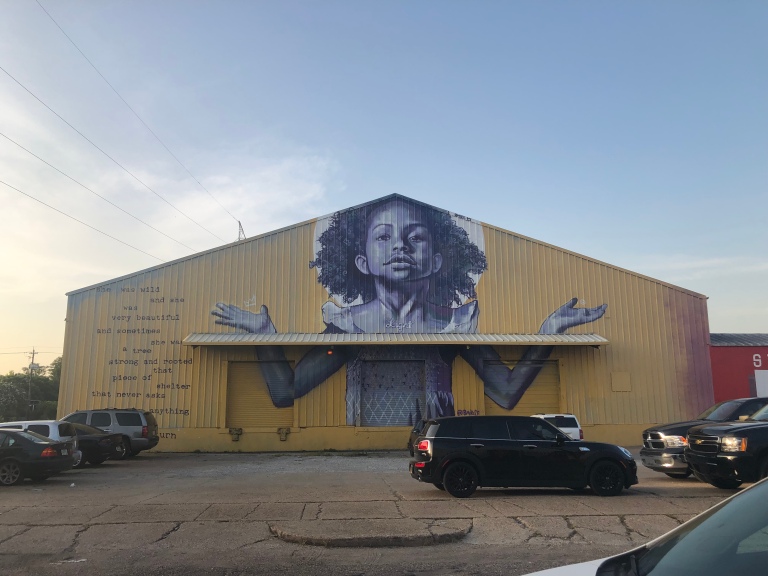 My office was closed on Thursday for Independence Day, but I had to return the following Friday. Lo and behold, my boss walked into my office on Wednesday afternoon to say the Board of Directors voted at the last minute to give us off Friday for an extended holiday. I was annoyed. Had I known ahead of time, I would have tried to find a few last minute flight deals. Thursday’s plans with a male friend didn’t go as planned, so I was set on having a bit of fun when I woke up Friday morning. I threw some clothes and a two wigs inside an already backed “hoe bag,” and headed to New Orleans with my mom on the passenger side.

New Orleans during Fourth of July holiday is also known as Essence Festival Weekend. I always say I’m not going, but I always end up there somehow. The thing about Essence that makes it a miserable experience for me is that it’s hot and crowded beyond belief. There’s a line for everything, and I don’t do lines. Traffic is a nightmare and everything is a premium price because so many people have taken over the city.

I don’t recommend a spontaneous visit to Essence isn’t recommended, but I’m all about that thug life and I don’t take my own advice. Since I was so last minute, we couldn’t stay directly in New Orleans. All of those hotels were booked or at a ridiculous price point. Instead, we booked hotel accommodations in Metairie, which was fine with me because it wasn’t that far and most of my adventures in New Orleans happen outside of the French Quarter anyway.

We checked into our hotel and made a game plan for the rest of the day. We started with a visit to Studio Be in the Bywater neighborhood. I’ve mentioned the art exhibit at Studio Be quite a few times on this blog because I really enjoy it. They had special view hours during Essence Festival Weekend, as well as special panel discussions featuring a few celebrities. As we strolled the gallery, Iman walked in. She was our first celebrity sighting of the weekend.

From Studio Be, strolled the French Quarter briefly, and did more people-watching than anything else. If there was ever a time and place to view the latest in black female fashion, Essence Festival Weekend in New Orleans was it. With the release of Girls Trip, there were a lot of group t-shirts. That was something I rarely saw prior to that film, but there were a lot of Flossy Posse’s around that weekend. Added to that was the various hairstyles – from braids to afros to weaves to wigs. I love us for real.

Next, we headed to dinner at Neyow’s, one of the many black-owned restaurants in the city. There was a three-hour waitlist, but luckily I added my name to the waitlist before we left our hotel earlier that day. Neyow’s expected a large crowd for Essence, so they had a DJ outside to keep the guests happy. We arrived just in time and were seated immediately.

At some point during dinner, my mom goes, “Look! There goes Lil Bow Wow!”

I turned around in my chair and who did I see? Lil Romeo. I laughed so heartily at her getting the two men mixed up.

“Look he’s coming right behind you! Go talk to him! Go take his picture!” my mom exclaimed.

I don’t generally get excited about “celebrity” sightings. He seemed to be very nice, but I wasn’t interested in a photo moment. I was sipping on their infamous punch and it had me feeling good. By the time we were done at Neyow’s, that bow wow punch had me leaning to the side, and it was time to go back to our hotel.

The next morning we went straight to the Convention Center. In our parking lot, there was a Fenty Pop-Up Shop. I love me some Fenty Beauty products, but it was just too hot for a full face. God bless those ladies who were working because the heat index was in the 100s, and they managed to smile through it all.

For a girl like me who doesn’t like crowds and long lines, the best time to go to the Convention Center is first thing Friday morning. There won’t necessarily be the popular lineup of celebrities and activities, but at least one can navigate it quickly. That wasn’t an option this time, so we joined the midmorning crowd that Saturday and stayed for the whole day.

The Convention Center is where all of the action is. There are corporate sponsors like McDonalds and Ford, black-owned vendors selling apparel and beauty products, seminars, and so much more. Essence has seriously grown over these past years, and the amount of information available is almost overwhelming. There’s no way to see and experience everything in the Convention Center in a day, and it is best to download the official app and get a game plan.

The one thing I was most excited about was seeing five of the democratic presidential candidates speak on one of the stages. There timeframes varied, and there was just so much going on during the day, but I was able to catch Elizabeth Warren’s segment. I also had a moment to joke around in a photo session.

We paused for lunch at one of the several vendors in the Essences Eats section of the Convention Center. We stood in yet another long line for wings from We Dat’s Chicken and Shrimp. There were a variety of food options for any diet, but We Dat’s seemed to be the most popular. At the same time, one of the ladies from Bravo’s Married to Medicine (I don’t watch the show, but I think her name was Quad) was doing a cooking segment with local chef Kevin Belton.

After visiting various vendors and standing in long lines, my mom and I were both ready to go. It had reached the point in the day where there was just too many people. We took the sweaty walk back to the car and headed to the hotel. I refreshed and headed back out to hang with my sorority sisters that night for some rooftop shenanigans. With the exception of an older group of women I met in the elevator, none of the people I spoke to attended any of the nightly concerts. The lineup didn’t appease me this year, but I have gone in previous years.

The next day was pretty uneventful. The energy we had at the beginning of the weekend was gone, and we just wanted a good meal and our own beds. We had a quick breakfast and headed home.

A last minute visit to New Orleans during Essence Festival weekend is possible. Still, the best experience comes from planning in advance and getting a game plan. Yes, one can have a great time without going to the concerts and without going to any of the official Essence events. Essence is so much more than the concerts. How often can a large group of black women get together and just celebrate life? Women from all over the world were there having a great time, and there was no hateration and holleration in the dancery. Gather your tribe of girlfriends and make your way down to Louisiana in 2020.